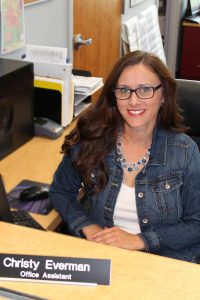 The City of Union has named Christy Everman as an Administrative Assistant.

Everman has worked for the city since August of 2016, and has been named to the permanent staff after serving as an administrative assistant in a temporary capacity.

Everman will handle the day-to-day administrative duties for the city staff, with a special emphasis on accounting, finance and budgeting.

Everman brings experience to the position, with prior employment at Boone Kenton Lumber and Building Supply, where she was the assistant office manager for eleven years.  She is also an independent businesswoman, with the Thirty-One Gifts company, where she has risen to the rank of Executive Director and received four promotions in ten years to rank among the top 1% of consultants nationwide.

Everman received a Bachelor’s of Science in psychology from Northern Kentucky University.

Everman, and her husband Jeff, reside in Independence with their three children.

For more information on the City of Union visit the city website at www.cityofunionky.org or contact Communications and Operations Director Melissa Hinkle at [email protected] or 859-384-1511.