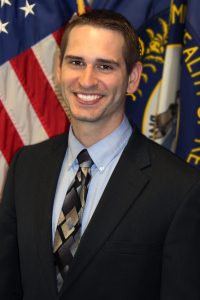 The City of Union has hired David Plummer to serve as City Administrator.

Plummer replaces CAO Matthew Dowling, who resigned to accept the same position with the City of Elsmere, Kentucky in February.

“David is exactly what we were looking for in a candidate,” said Mayor Larry Solomon.  “We were impressed by his experience and his enthusiasm for the position.  We look forward to a long-term relationship with him guiding our city forward.”

Plummer’s main focus will be on economic development and public works, in addition to day-to-day city management.

Plummer comes to Union from Moscow, Ohio, where he served as Village Administrator for the past two years.  In that position, he performed a variety of functions, including managing village staff, overseeing the operation of the village’s waste water treatment system, and serving as village zoning officer.

Plummer is a Northern Kentucky native and graduated from Highlands High School in Edgewood.  He attended Xavier University, receiving his Bachelor of Arts and Science degree in political science in 2007.  He earned a Master’s of Public Administration degree in 2012, from Northern Kentucky University.

Plummer, and his wife, Melissa, reside in Edgewood, with their two children Nora and Liam.

For more information on the City of Union visit the city website at www.cityofunionky.org or contact Communications and Operations Director Melissa Hinkle at [email protected] or 859-384-1511.