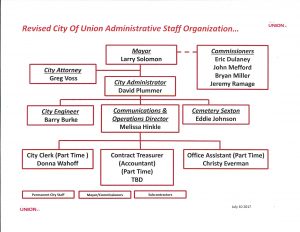 City of Union Mayor Larry Solomon has released an updated staffing organizational chart showing the reorganization of the city staff.

The City of Union is now the second largest city in Boone County and we are growing at a rate of approximately 2% per year.  It is projected that by 2020 our population will be between 8,000-10,000 people.  In the past when the City of Union’s population was 2-3,000, it was appropriate for there to be a City Commission and one full-time employee.  But now, the City of Union has to be positioned to be able to handle continued city growth.

“It is important to stay ahead of the game so the City of Union can better manage growth.  Growth will not stop coming; I prefer to manage it, than it manage us!”  Mayor Solomon notes that the updated City of Union staffing organizational chart shows how the City is now poised from a staffing perspective to better serve the city, its residents and, most importantly, manage growth.

The new system reorganizes all city staff under the direction of the City Administrator David Plummer.  Plummer was appointed Union CAO in June of this year.

Melissa Hinkle, who has served as the Communications Coordinator since September of 2016 has been moved to Communications and Operations Director, and oversees the day-to-day operations of the city office, in addition to her duties as the chief public relations contact for Union.

Donna Wahoff was appointed to the position of City Clerk in June, and has taken over the primary responsibility for city forms, public information requests and compliance with city, county and state laws, particularly in the areas of records retention and maintaining office files and systems.

Christy Everman, who has served as Administrative Assistant for the city since August of 2016, remains on in her capacity as the primary point of contact for office visitors, and continues to handle the day-to-day organization and structure for the city financial records, including accounts payable and receivable.  She was hired as a permanent member of city staff in June, moving from a temporary position with the city.

The city is in the final stages of filling a part-time position as a city treasurer, and hopes to announce that individual in the fall.  This person will have administrative oversight for the city’s finances and will assist in preparing financial documentation for commission meetings and the annual state audit.

“These changes position Union for long-term growth,” Solomon said.  “Union is the fastest growing city in Northern Kentucky, and we need a stable, organized and competent staff in place to keep pace with that growth.  The team we have assembled is ideal to help Union continue to grow and reach its full potential as the place to live in Northern Kentucky.”