The City of U 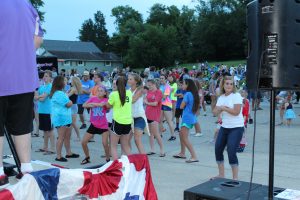 nion has released results from a recent survey on the Union Celebrates America event on June 30, 2017.  This was the ninth year for the event on Old Union Road, which has become a tradition for the area as the first major event of Fourth of July.

“Overall, I think these results clearly indicate what we already knew.  Union Celebrates America was a great event,” said Mayor Solomon.  “This year’s event had the largest crowd on record, with more than 3,700 estimated attendees.  The City of Union, along with the staff of Boone County Parks, are to be commended for organizing such an outstanding event.  I hope everyone will mark their calendars for June 29, 2018, for the next Union Celebrates America.  My direction to our staff is to make next year’s event even bigger and better!”

Overall, 68% of responders rated the event very good or excellent, with 89 percent rating the event at least as good.  In organization, the event also received high praise, with 70 percent of survey responders thinking that the event was very organized or extremely organized.

82 percent of the responders to the survey felt the event was about right or just a bit short in length.  The 2017 event timetable was adjusted to allow for the fireworks to be detonated about 30 minutes earlier than scheduled to beat out an impending severe storm that hit the area around 10:30 p.m.

Staff friendliness was also rated highly, with 80 percent of responders rating the staff as very friendly or extremely friendly.  Responders also felt they got information about the event ahead of time as well, with 68% responding that they received most or all of the information they needed to attend the event prior to the scheduled date.  The venue location received the most praise with 93 percent of responders rating the location as good to excellent.

Individual comments commended the parade and fireworks, with several special mention to the Wulfe Brothers Band, who performed in the headline role.  Other comments included more community participation in 2017; fantastic fireworks and hometown feel and the addition of food trucks and more bounce houses from previous events.

Attendees did note the lack of a high school band in the parade as a downside.  While local bands had been invited according to city staff, KSHAA “dead period” rules prohibited any of the area high school marching bands, including nearby Ryle High School, from participating in the parade.  The “dead period” is mandated by the state high school association, and usually falls during the scheduled date of UCA.

One suggestion was made to include music to synchronize with the fireworks show, which is currently being planned for the 2018 celebration.  The city is also looking to address a complaint of long drink lines with the addition of water stations run by local organizations in the area.