A community parade will kick things off at 6:00 PM.  Area residents will be affected by temporary road closures, US 42 in particular, on Friday, June 24 from approximately 5:45 PM-6:30 PM.  The parade route will start at Union Park and head out to Old Union Road, then onto US 42, to Double Eagle, a left on Raiders Run, and end behind Ryle High School. Roads will reopen immediately following the parade.

Mayor Larry Solomon states, “As the population in Union continues to grow, city events invite residents to gather as a community.  Union Celebrates America is open to all city and surrounding area residents.” 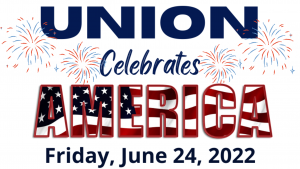