The City Commission of the City of Union recognized Gray Middle School students Ben Putnam and Joseph Zabik, for their winning design of a proposed City flag at a ceremony at GMS on April 6.

The duo designed a three-color flag featuring a series of triangles and stars representing Union’s Past, Present and Future, and the growth of the city in recent years. 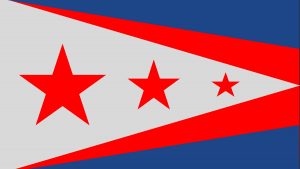 Two other students, Jayden Wren and Daniel Kessler, were recognized as the runner up team in the competition.  All four students received certificates, presented by Mayor Larry K. Solomon and Commissioner John Mefford at the ceremony.  The six other finalists received recognition certificates from the school for their participation.

Five teams of students from Gray Middle School, under the direction of instructors JoBeth Shaffer and Heather Tombragel, presented five potential flag designs to the commission for their review and consideration at the March 2018 City Commission meeting.  Each flag was displayed, along with a slide explaining the reasoning and symbolism behind each design.   Information was also presented regarding a survey of more than 100 Union residents, who provided input and suggestions regarding colors, images and designs of potential city flags.  The commission voted on the winners at the April meeting, selecting the Putnam/Zabik team as the top design.

The project is part of a Project Based Learning (PBL) initiative in the Boone County Schools, designed to provide hands on and relevant learning activities for students to work on real-world projects and applications.