State of the Union by Mayor Larry Solomon

It has been almost eight (8) years since our administration, under my leadership, has taken office.  It has been a while since I issued the State of Union, KY.  I would like to now update our residents as to all the great things happening in the city we love…Union, KY.

On March 3 2022,“Union, Ky., was named No. 8 on Dwellics’ 2022 report, ’Top 100: Best Cities to Raise a Family in the South’.  Dwellics is a city data analytics specialist that uses a variety of categories and comparisons to help anyone find the best place to live based on defining household characteristics and preferences.” *.

This was one recent accolade the city received among others.  With this type of recognition, the city has been growing and will continue to grow.  This goes back to a saying I have quoted for several years…

“We can manage city growth or it can manage us!!”  Over the past eight years, this administration has chosen to strategically manage growth…and that is what we will continue to do over the next four years!”

The city currently has a lot of projects going on.  All projects are designed to meet the needs of current and future city residents and their families.  One major thing I hear as your Mayor is… “I would like to have restaurants and services right here in Union so I do not have to go to Florence or other parts of Boone County to find them!”  We have been working on these projects for several years, and they are now coming into fruition and development has started or will be starting soon.  (The attached pictures show some proposed plans for new developments.)

This $170 million project is now being built along US Rte. 42 between the Fire Station and Fowler Creek subdivision.  There will be an array of new retail businesses specifically chosen to target Union resident service needs.  There will be high-end restaurants and service businesses located within the Promenade that I am sure will appeal all those who live in Union and those who live nearby.  Additionally, the Promenade developer is building approximately 300 high-end apartments designed to meet the needs of business professionals and retirees.   Lastly, the Promenade will be building 46 high-end patio homes designed to provide the full spacing of a home but without the worry of yards to maintain.  The retail portion of this project will be operational toward the end of 2023; this project will be fully-completed sometime in 2026. 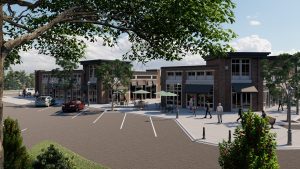 This $50 million project is going to be built on the other side of US Rte. 42 down from the Promenade between Brilliance Avenue and Bristow Drive.  For the past 15 years, the Grammas family has held onto this property waiting for the right time to develop it.  A couple of years ago, Paul and Nick Grammas approached the city to work with us to develop their property.  They plan to build a high-end, mixed-use (retail and apartment) development.  Additionally, they plan to build 12 four story condos along Brilliance Avenue.  For our part, the city plans to extend Brilliance Avenue to the Mt. Zion Road roundabout.  The new Brilliance Avenue extension will provide greater accessibility to the new Grammas Center from Mt. Zion Road and greater connectivity for Harmony residents to Mt. Zion Road without having to go out to US Rte. 42.  This project is planned for completion sometime in 2024. 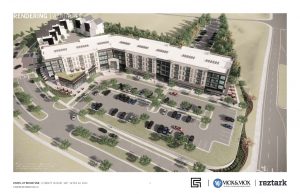 Richard Graeter has purchased 5.6 acres of the new Kroger outlots next to the Wings and Rings restaurant location.  He is selling half this property to Braxton Brewery so they and another food retailer can build.  Both developers will be building a center outdoor location so customers can sit and enjoy their purchased ice cream or beer.  Additionally, this outdoor center will serve as an event spot for both retailers.  This project is planned to be completed in 2023-24.

I am asked how we got Graeter’s to choose Union.  They were deciding between Union and Indianapolis to build.  All I can say is that it is nice that Richard Graeter is my Masonic Lodge Brother and good friend.  I am also asked how we got Braxton Brewery to come home to Union.  (For those that do not know, Jake and Greg Rouse, owners of Braxton Brewery, started their company at their home on Braxton Road, Union KY.)  Jake and Greg Rouse are good friends of mine, as well as Richard Graeter’s.  It was quite easy for me to pitch to them that they should come home to Union…and with it being a joint venture with Graeter’s, it was a no brainer.  I am happy to have helped bring this project to Union.

Union Pointe Center will be located on the corner of US Rte. 42 and Frogtown Road across from Ryle High School.  Dr. James Wright formerly owned this property for many years and it was never fully developed until now.  Several retail outlets are planned to be located on US Rte. 42 directly across from Ryle High School with access from Callie Way.  This project is planned to be completed sometime in 2023-24.

I saved the best for last.  Since 1999, we have all heard that Union has a Town Plan to build a Town Center.  Town Center Plans were drawn up to be anywhere in Union.  There has not, until now, been a designated location for the new Town Center…now there is!  The City of Union has purchased 22 acres from the Grammas family.  These 22 acres are located between US Rte. 42 and Old Union Road.  There will be a new City Building built, a large open park area just off of US Rte. 42, retail for smaller businesses that would have a harder time competing at other new Union projects, housing behind the retail locations, and walking trails around the new Town Center development.

The city has a strong relationship with the Grammas family and was able to secure the purchase of this property for $4 million.  If the city waited to purchase property for the Town Center, two things could happen: 1) Any appropriate Town Center property would be purchased by developers; or, 2) the price would be higher than what we could purchase it for now.  The City Commission decided to move forward now to secure this prime property.  To pay for this purchase and development, the city has secured low interest funding from KLC and passed Business Licensing legislation that includes a 2% payroll taxation.  Payroll taxation is only paid by those who work within the city; primarily, by non-Union residents who come into the city to work.  Those who live in Union and do not work here, do not pay any of this taxation.  Almost eight years ago, this administration was elected to build a new Town Center…we are now fulfilling that promise.

Promenade developers will soon be developing the Kahmann Farm into a new high-end residential development.  The city helped the developer, after he agreed for this property to be annexed into Union, to change this property’s zoning “from one house per acre” “to house clusters with lots of green space”.  This project is planned to be completed sometime in 2025-26.

The city is also working on additional developments that will be announced at future dates.  With these plans, collaboration with Boone County Schools always takes place in order to project continued population growth and schools for new students in the city.  When new developments are ready to be announced, I will update this State of Union, KY address to let you know.

In closing, I want to thank all City Commissioners, Staff, and Contractors…it is a pleasure working with these well qualified individuals.  All these individuals (current and past teams) have helped this administration over the last eight years to be very successful in taking this city from being considered a small bedroom community to becoming a larger city…yes, the second largest city in Boone County!